In 2014, Faithful Friends Animal Society surrendered Harvey, a lovely mutt, as his his owners were parting ways and no one can take care of him anymore.

Since then, Harvey has been waiting for a family to adopt him for the past 4 years, but no one comes to show any intention of keeping him. Because of the very little chances of getting adopted, he proved everyone that he is worth keeping for and that he only need some time to shine. 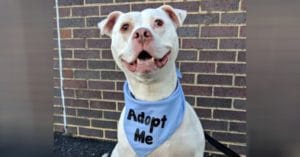 It was one of the usual days when the shelter’s handler and Harvey went out for a walk. Suddenly, Harvey began barking at a drain and as they got near the drain, they saw a trapped kitten. When the shelter’s cat department came on the scene, they discovered that there are more trapped kittens. Two weeks after they found the first kitten, there were two more that were rescued.

They named the three lovely kittens; Beta, Brie, and Brewster. Luckily, Harvey had a great instinct to sense danger.

Thanks to his heroic deed and his alertness, the kittens were saved from being drowned. These three lovely kittens were placed in foster homes and also waits for adoption

Meanwhile, playful Harvey still stays at the foster home waiting for someone who would keep him forever. He was transferred to faithful Friends Sanctuary Care Program. This place provides care for animals that are difficult to adopt because of terminal illness or behavioral challenges. 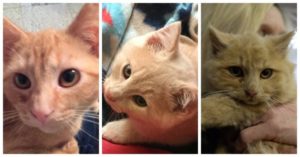 According to the shelter, Harvey is the best partner specially if the person who will adopt him loves to run or to hike because Harvey’s agility is great. He also loves to stay on the couch and watch TV, but it would be best if Harvey would be the only pet at home.

We are really hoping that someone would come for Harvey soon. He displayed a very good deed and that means he can do a lot more for his owner.

Pizza Parlor In New York Included Photos Of Dogs On Pizza Boxes, And It Was A Success

Man And His Dog Rides Across Canada To Raise Awareness For...

When people try to raise awareness about a certain issue, sometimes the people behind it would pull out all the stops to get attention....

Rescue Puppy Smiles At Everyone Who Passes By Her Kennel At...

Hundred Of Dogs In An Asylum Are Being Taken Care Of...

Terrified Pit Bull Living In A Garage Goes To Her Forever...