Seeing an unknown person jumping off the fence of a neighborhood might make you suspect of a burglary incident. How about if the man who was trying to break in was a police officer? What will be the first thing that will come to your mind?

The thought of a policeman trying to enter a fenced gate without any warrant would indeed raise someone’s interest. Well, think no more because it might be that the officer was just trying to help a dog inside. This is what happened in San Felipe, Chile.

Second Lieutenant Mr. Giovanni Donke of the Carabineros broke in a house to save a dog who got trapped tightly around a cloth. The dog was left all alone in its owner’s house. Maybe because the playful pup was snooping around, or it might have to try to remedy the boredom, the pup reached out for the cloth canopy in the patio. 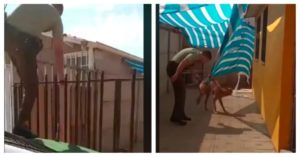 While the officer has been patrolling around the area, they heard a cry for help. They immediately stopped by to respond to the situation, but they were surprised to saw the distressed dog. The Second Lieutenant was left with no choice but to climb over the police car and enter the house through the fence.

The poor, struggling pup has been trying with all his might to bite off the cloth to get free, but it seemed that his efforts were to no avail. The cloth got stuck on the lower part of his back. All thanks to the officer who used a knife to cut the cloth, the dog got freed at last.

At first, the dog took his time to get to know the brave man who saved him from an unfortunate situation. Then, on his own “poochy” way, the dog thankfully snuggled and licked the strange in front of him, his very own hero.

A Dog Can’t Stop Cuddling With A Woman Who Saved Him...

Kayla Filloon had been walking dogs as a volunteer for ACCT Philly, a Philadelphia-based animal shelter, for one year. Kayla absolutely loved her work...

St. Bernard Tries Making Friends With A Porcupine – And Quickly...

Made Of Pure Joy: This Viral Video Of A Pup Playing...

Elderly Rescue Dogs Use A DIY Escalator To Climb The Stairs...

Dog Goes Viral After Donating A Bag Of Blood To An...